A skiff of spring snow coats the pastures and two cars in our driveway. Elmira Pond has guests. My daughter Allison is visiting from Missoula, seeking the ranch solitude as she revises her graduate work--an hour-long radio script about remediation in the Treasure State (MT).

It's Sunday morning and my daughter knocks on my bedroom door. Peering in she asks, "Mom, do you want to go for a walk?" Her two huskies wrestle like wolf-pups in anticipation of walking the pastures and pond. Not wanting to miss a minute with my grown daughter, I get out of bed and into boots and heavy jacket.

Ilya doesn't waste a minute. As soon as we pass the horse gate into the south pasture he lopes to a gopher mound and digs. Allison sips tea and I snap photos. Jasper gazes longingly at Elmira Pond. We can hear pileated woodpeckers pounding tamarack bark that direction. "Let's walk around the pond," I say.

Allison calls Ilya, and we walk through another pasture to get to the pond. A red-winged blackbird and seed-seeking robins chortle. Two crows pass overhead cawing to the murder that awaits them across the train-tracks. Migrating birds are returning, but still the pond is a slab of ice with some pooling at the edge.

Huskies race ahead, edging around the pond like furry thoroughbreds. We slog behind, stepping from one frozen mound of grass to another with water gushing from beneath the ground like a living sponge.

In essence, Elmira Pond is a spring-fed sponge with a deep pool. How deep, I really don't know, but deep enough to contain fish and interest osprey and mergansers. The spongy, grassy banks attract frogs that in turn attract Blue Heron.

It's a thriving pond.

The huskies spread out, noses to the snow-covered grass, trailing mice and other alluring scents. Jasper seems content to play dog-detective, but Ilya is hunkering in that odd way that animals do before a leap. He's at the lip of a creek that flows out of the pond, south into the abandoned pastures of Bluebird Ranch.

He jumps, landing on the edge of the ice and breaking through. We both hold breath as the 85-pound dog flounders in deep water. How deep is Elmira Pond if its overflow is beyond the lanky legs of a husky? Ilya claws his way up to what we know realize is an island of grass.

It's that moment from "A Christmas Story" when the schoolboy, Flick, is dared to touch his tongue to the playground flag pole--he cries with increasing panic, "Stuck? Stuck...stuck!" That's the expression on Ilya's face. He's stuck on an island, surrounded by deep water and eggshell ice. And he's panicked.

Allison is relieved and tries to coax him back. But Ilya has slunk from confident hound to terrified kid. He paws at the water, trying to obey but afraid to step. Allison now walks around the creek, treading carefully across a narrower spill of ice-covered water and is walking to the other side of the island.

But an island, is an island; surrounded by water. Ilya is good and stuck. I'm left to guard over Jasper lest he tries to get to Ilya, and together we stand in a sinking bog. If my socks are getting wet, it's worse for Allison. She steps off a hummock of grass into water that pours over the tops of her boots. Her yelp let's me know that it's really cold.

Ilya continues to paw at water and whine. I'm thinking if my daughter goes into the water, I'm next. This soggy-socked rescue is not going well. Finally, Ilya musters the courage and plunges into the creek on the other side of the island. It's belly-deep and he treads across.

Once on the other side, he's so happy he runs to Allison. I'm so relieved. When Ilya reaches her, he gives a full-body wet-dog shake. Now Allison has more than wet socks. The huskies reunite and romp back toward the pastures. And again, Allison and I slog behind.

Back at the house, I start us a fire and brew strong coffee while Allison towels off Ilya on the porch. He then stretches out before the fire, smelling of wet dog. The order mingles oddly with woodsmoke and java.

My daughter and I laugh at the sprawled dogs and go change our socks.

This is our soggy, silly story for Sunday. Join host blogger, Everything Susan, for more Silly on Sundays stories. 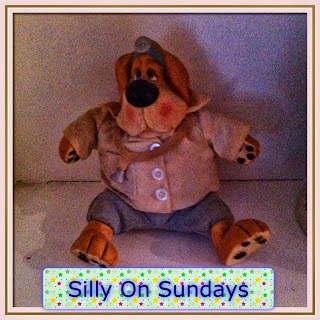 Posted by CharliMills at 6:28 PM